The year has been full of twists and turns for the visual kei band. 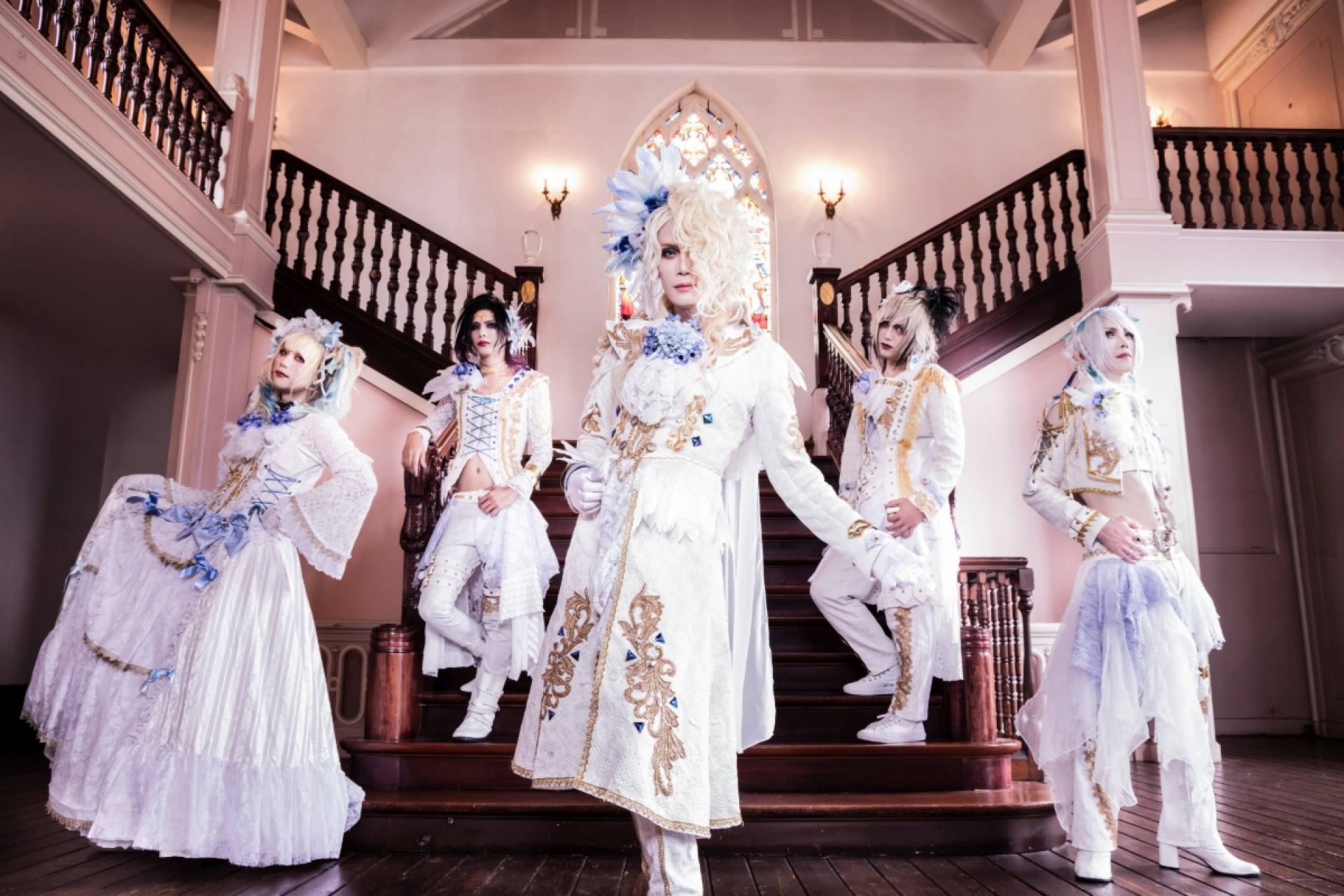 © Scarlet Valse. All rights reserved.
It has been a busy year for the visual kei band Scarlet Valse. The band seems to have been touring Japan as intensely as possible under present conditions, in addition to releasing as many as three new singles by November. To make things even more interesting, these singles aren't just a series of disconnected releases. Instead, they carry with them a sort of visual theme of change.

The first Scarlet Valse single of the year, called Inferno, was released in April. According to a press release, the band went through a metamorphosis for this release. From the angelic theme of the previous single Heaven, the band had now descended to the fiery pits of darkness. Anyone can easily discover this by taking a look at the single's promotional picture. Black wings flapping and artificial leather shining make it clear enough that the powers of evil have taken over the band. However, as the main lyrical themes of Scarlet Valse tend to be uplifting rather than depressive, it was no surprise that the trip to Inferno's darkened domains proved temporary. On June's ONE, the band returned in elegant black suits. With encouraging smiles they had come to provide a dose of the energising power of music into the coronavirus-ravaged summer.

In October, as if these stylistic contrasts were not enough, the band performed two new songs at an event called Catharsis. The songs, filled with heroic valour, were then released as a single named Valkyrie. According to the band, they went through a purification for this single, which is again clearly visible from the publicity shots. The new shining white costumes certainly give off a chivalrous aura. Considering all these visual changes Scarlet Valse has taken on during the year, it should be interesting to take a closer listen to the three singles and make some comparisons. So, without further ado, let us see how the band's musical line corresponds with the visual rollercoaster they've offered their followers this year.


Inferno sets off with the furious title track. At first, one's attention is likely to be stolen by the especially harsh overall sound. The vilely buzzing guitar distortion and the strident drums pierce the listener's ears like the shrieks of poor souls condemned to eternal agony. A confusing layer to the violent soundscape is added by baroque synthesisers whose presence in the overall mix is remarkable. As for the composition, the song is, in a word, quite infernal. Chugging one-note metalcore riffs rotate with maniacal black metal sawings and grandiose power metal choruses. The atmosphere is actually so intense that one can't help but have a devilish smile on their face and mosh.

The second track Cruelty Lovers does not reach as high a level of intensity as the title track. Attempting a slightly more melodic approach, the song remains lukewarm after the ruthless Inferno. The frenzied tempo nevertheless keeps the atmosphere from totally crumbling while proceeding towards falldown, which fortunately returns to the chaos-embracing mania of the title track. On this, one can really feel the power of the overflowing guitar distortion. The catchy main riff ranks next to white noise in clearness but somehow, the demonic wall of distortion gives off quite a powerful impression. The song also includes a melodic chorus that faithfully recycles some worn-out scales of 'symphonic metal'. Regardless of the lack of invention, the chorus sits quite nicely with the wild riff storm.

Overall, Inferno leaves a very good impression. It shows the band utilising a lot of elements from different subgenres of metal. Sure, some of the ideas are rather hackneyed but the band succeeds in using them in mostly fresh manners and with attractive energy.

Having seen the demonic side of Scarlet Valse, it is time for our nostalgia trip to proceed towards summer and the then-brand new single ONE. Even though it was clear from the press release that the new song would be a ballad, the contrast between the title track and the previous single was quite a surprise. ONE is a textbook example of a power ballad that adds little novelty to the endless canon of such songs.


The only rather uncharacteristic detail considering the song's style is that some rather violent guitar distortion is employed here and there. This gives it at least a bit of personal punch. Mainly, the listener's attention is drawn to the beauty of the vocalist Kakeru's voice, which was overwhelmed by the overall mayhem of Inferno. The B-side L is as formulaic a composition as the title track. An aggressive guitar tone and the strong presence of synths give the soundscape a touch of personality but otherwise, the song is not very memorable.

This leaves the autumn single Valkyrie left to investigate. The title track of this starts with a pompous string intro. It soon turns out that the song is a faithful manifestation of an exemplary symphonic power metal anthem. Grand melodies, galloping rhythms and fast double guitar solos... Nothing exactly original, but then again, what else could you wish from a decent heavy metal song?

The B-side Lilly shows, however, that the most impressive songs are those that include something else on top of the ever-repeated chord progressions and schematic song structures. The relatively complex main riff hits harder than anything on the traditionalist title track. In addition, the verse stripped of guitars, and the especially nice piano interlude in the middle, give the song some pleasant inner variation. The guitar solos, as in the title track, successfully raise the overall excitement level.


It is quite interesting to note that, in spite of the wide range of visual changes Scarlet Valse went through this year, the three singles released during this time aren't actually as musically diverse as one could have expected. Especially the strong melodic focus and overall heavy metal-oriented approach, even to the ballad ONE, make clear it is one and the same band with their personal style behind all the visually disparate releases.

Inferno is clearly the best of the three singles, presenting the most inventive aspect of Scarlet Valse with an excellent fusion of heavy metal styles. The other two singles both, in their own ways, rely on a more formulaic approach and are thus not as memorable. It nevertheless has to be said that, thanks to the band's aggressive overall sound, all three releases are clearly recognisable as works of Scarlet Valse. A capable band can certainly breathe a little fresh air into even the most worn-out song structures.

Inferno, ONE and Valkyrie are limited releases that are available exclusively at live venues and via the Starwave Records online store.
Buy Scarlet Valse releases and merchandise online
ADVERTISEMENT 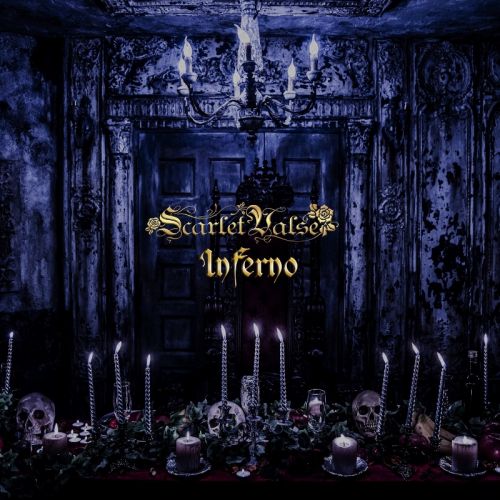 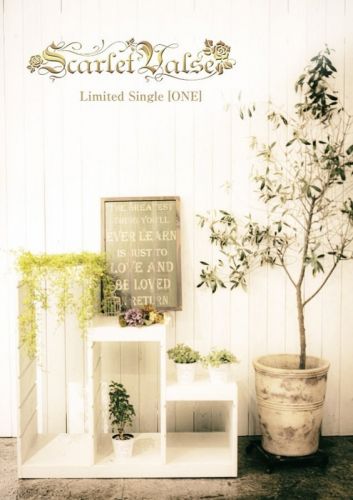 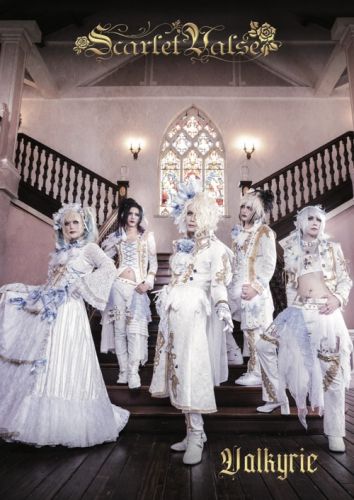