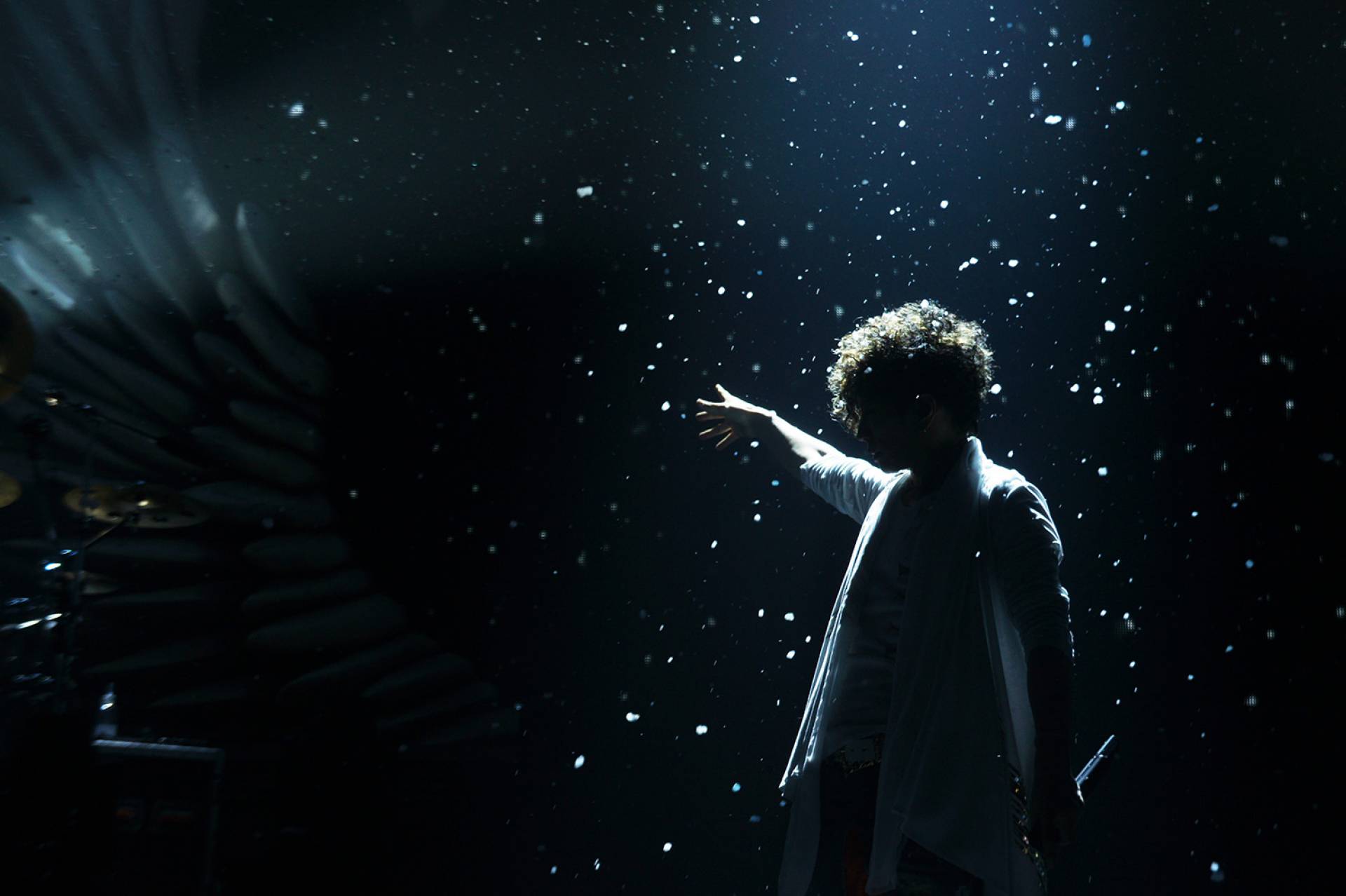 Four years on after his last tour, and about half a year after his 46th birthday concert held on July 4th last year, GACKT returned this January with GACKT 20th ANNIVERSARY LIVE TOUR 2020 KHAOS. To celebrate two decades of his solo career, the tour was originally scheduled to consist of twenty shows in eight cities across Japan, but sadly the two final shows in Fukuoka at the end of February had to be postponed due to coronavirus-related concerns. JaME was in the audience for the singer's second performance at the Tokyo International Forum Hall on January 25th.

The first impression upon arriving at the venue was that GACKT’s popularity is still alive and well. The venue, which is fit for up to 5000 people, was packed, with pretty much everyone trying to buy merchandise before the show. It is pleasing to note that some of the merchandise was being sold in order to help fund the reconstruction of Shuri Castle, a UNESCO World Heritage Site in GACKT's home province of Okinawa. It was severely damaged by a fire last October.

The huge lightsticks that were given out to each spectator at the hall entrance lit up as the show began with a video of GACKT and the CAMUI G SCHOOL in the middle of a meeting, trying to figure out an appropriate set list for this 20th anniversary tour. They even introduced the first songs of the show to the audience. The screen was removed and revealed a stage set with an exotic, ancient vibe, decorated with beautiful columns and a big stairwell covered with huge wings at its rear.

The concert then truly began with WooHa BABY!!. GACKT, clad all in black leather, performed some very precise moves with sticks while singing, as if he was in a taiko arcade game. This song served as a good warm-up for the audience, as everyone could replicate the choreography projected on the screen behind the singer. There were similar scenes during Graffiti, the main difference being that GACKT exchanged his sticks for his traditional cat gloves.

For the next song, the classic Papa lapped a pap lopped, GACKT sang and danced alongside his backing dancers, showing age - lest we forget he'll be 47 this year - hasn't slowed him down as a performer. The only disappointment came from the sound, probably caused by the acoustics of the venue, when GACKT’s voice sometimes echoed. The fourth song, Jesus, electrified the audience, screaming "hey!" over and over during the chorus.

The huge screen covered the stage entirely again to play another part of the GACKT and the CAMUI G SCHOOL show. Mixing humor, highly questionable gastronomy and self-derision, the video pleased the audience, who laughed along. At the video's end, it was revealed that GACKT chose to pay tribute to one of America's biggest pop stars.

Then began the iconic Lu:na. GACKT was wearing a rhinestone-decorated silver suit that clearly reflected his inspiration for the performance. The tribute didn’t stop there, as the choreography worked in many signature dance moves. For EVER, the stage turned into Las Vegas, with lots of colorful lighting and smoke effects.

ANOTHER WORLD brought a nostalgic mood, accompanied by scenes from "Moon Child", the movie GACKT starred in with HYDE from L'Arc-en-Ciel. This vibe continued into Kimi ga oikaketa yume, with the screen showing footage from the past twenty years of GACKT's career. It ended with a projection of golden ribbons.

For the third intermission, the video of GACKT and the CAMUI G SCHOOL showed a blind test between the singer and some other members. It showed how GACKT liked to cheat, buzzing other members' buzzers despite knowing they didn't know the answer. A feline theme was then introduced.

GACKT and his backup dancers performed GHOST and OASIS in catsuits. Then, he gave a monologue, explaining how during the past twenty years, lots had happened. Many good things, of course, but also much drama, hardship and loss, but because the fans were always there to cheer him up, he's determined never to give up and to continue to do his best. The audience listened religiously, and some sobs could even be heard.

This emotional part of the show opened with Kimi dake no boku de iru kara and ended with Orenji no taiyou, the iconic theme song of "Moon Child". The following video intermission wasn't another comedy skit. This time, the footage, entitled mirror of the heart, focused on GACKT giving an existential speech in Okinawa. The audience also learned that he plans to sing for the rest of his life, or at least until he loses his voice.

The final song Mirror provided the audience with an opportunity to appreciate watching GACKT perform shirtless, and to share one last moment of communion with him. The show ended with GACKT visibly moved, thanking everyone for their twenty years of support.

Although some may regret that only fourteen songs were played in two hours, GACKT never failed to live up to his reputation as one of the greatest showmen in Japan's music industry. One can only hope that fans will not have to wait too long for his next tour. 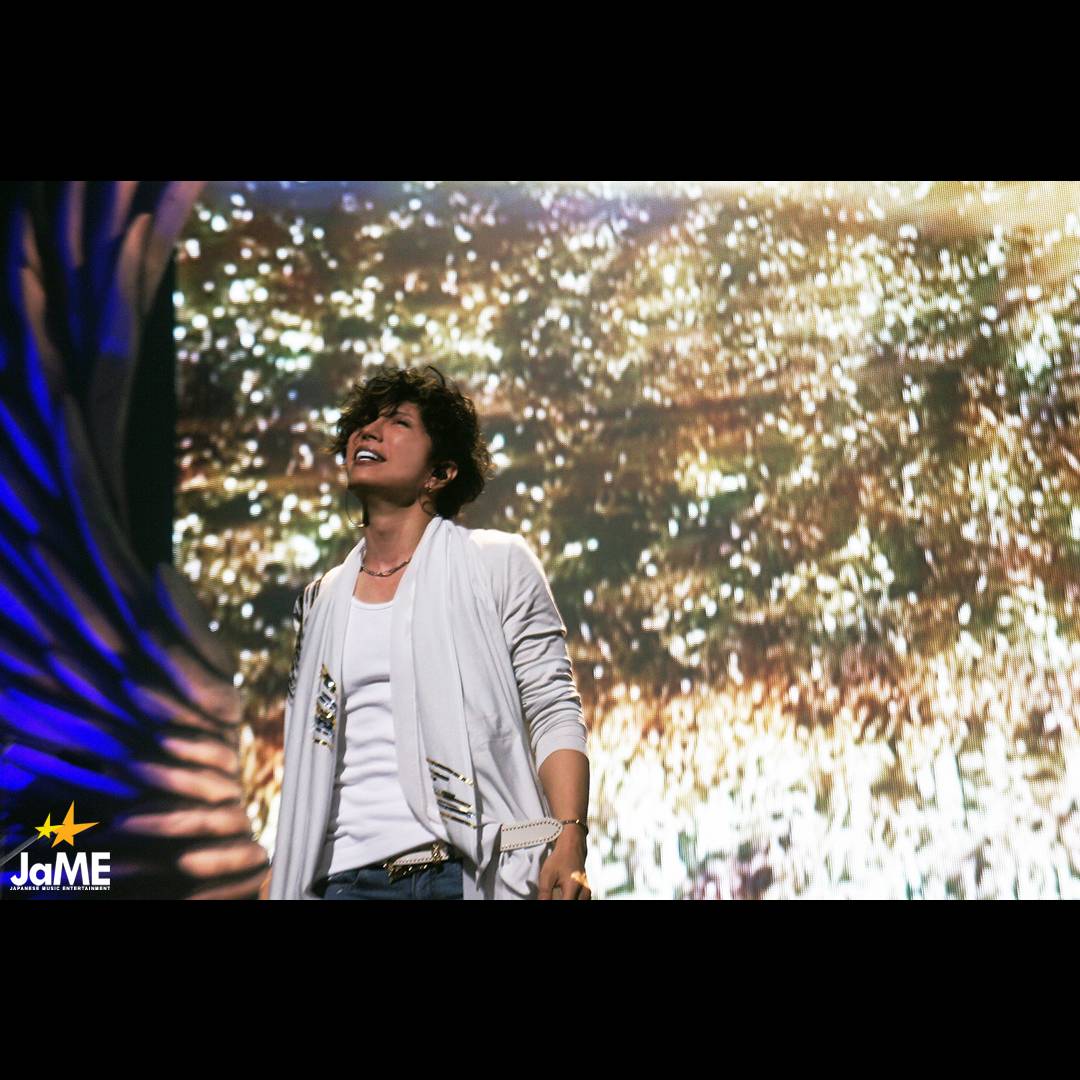 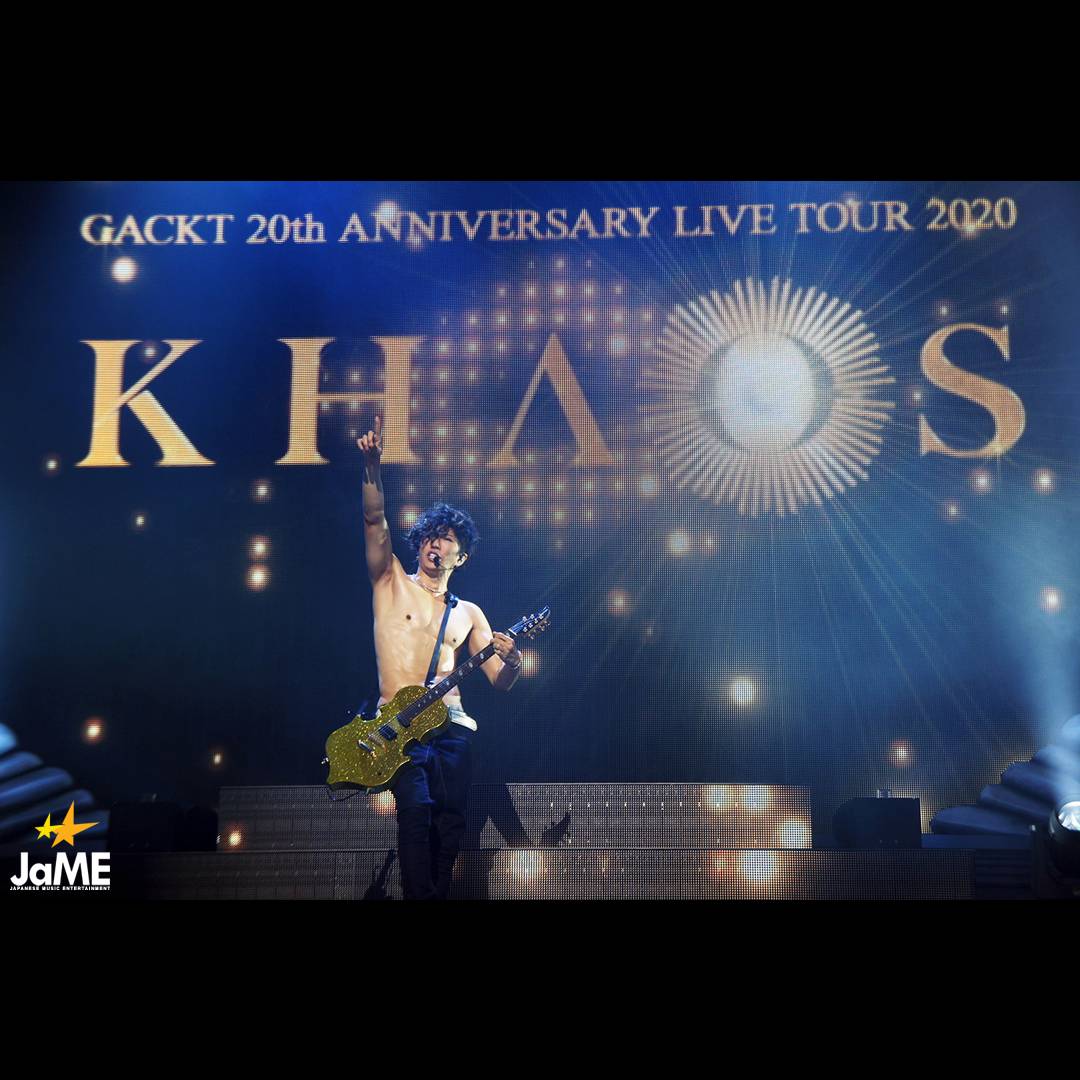 © GACKT. All rights reserved.
Previous Next 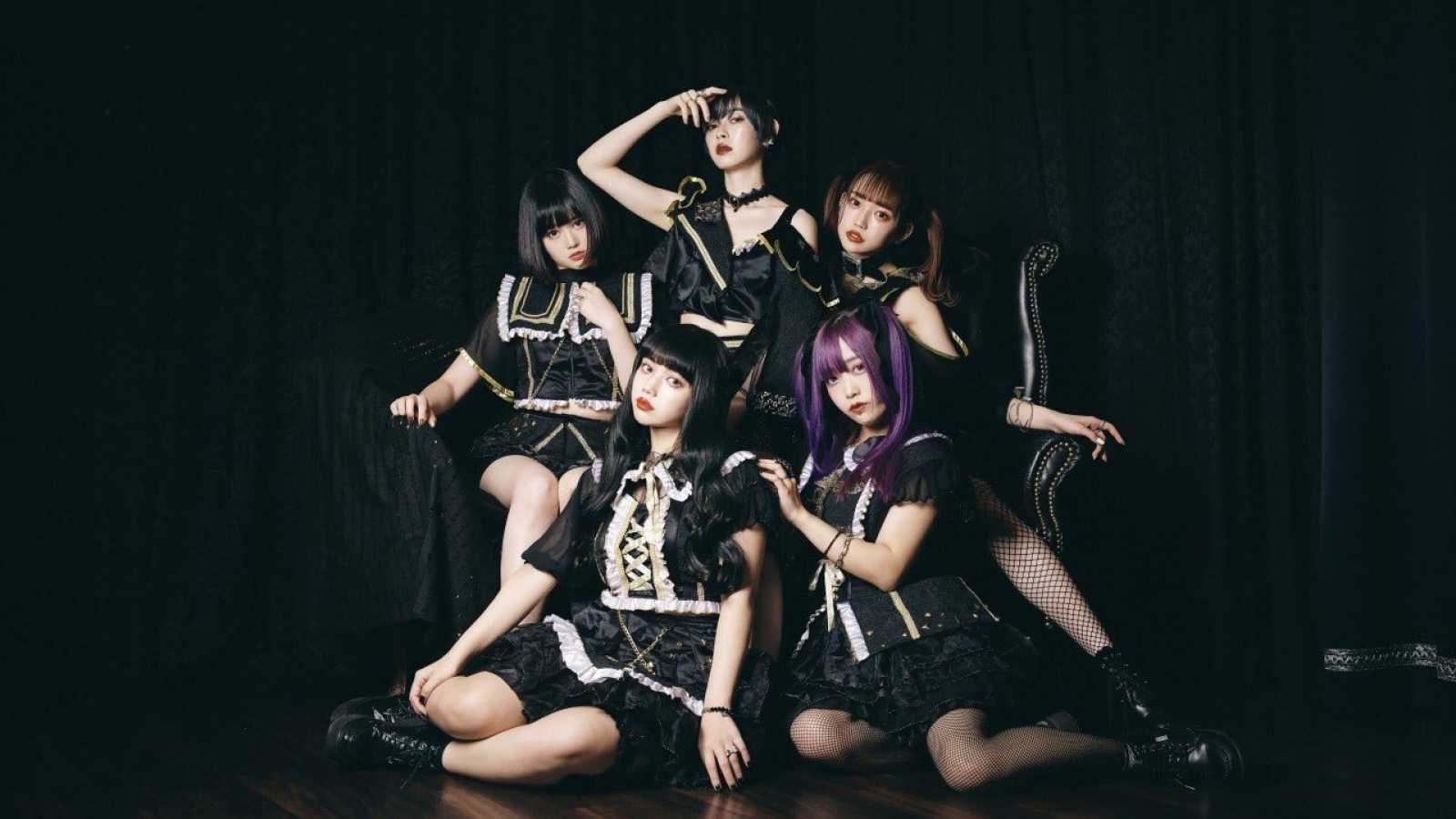 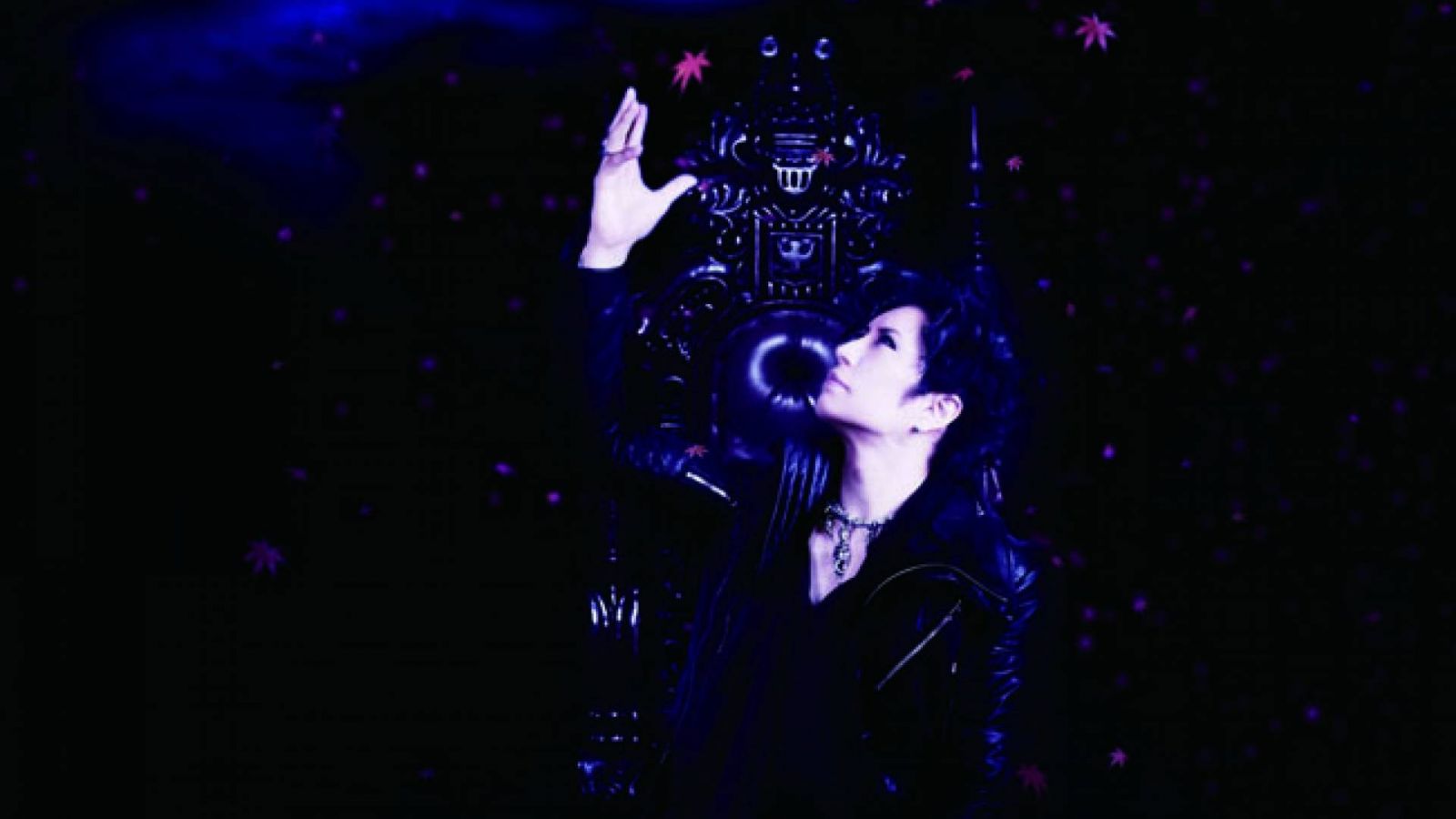